This is very bad.

Other powerful members of the committee are Majority Caucus Whips Terry Link and Don Harmon. Harmon is also the Assistant Majority Leader.

And don't forget, Sara Feigenholtz's mentor, John Cullerton, is president of the Senate. 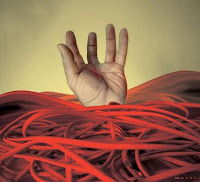 HB 5428 could be a slam dunk for Sneaky Sara and her adoptee-soaking special interests unless its stopped now. If passed, while other states continue to unseal our original birth certificates and free them from pinch-nosed bureaucrats and politicians without controls and restrictions, Illinois adoptees will be tied up in a ball of red tape for decades. All to fill somebody's pockets.

So far, no Senate hearings have been announced, but then none in the House were announced either, though the bill in its earlier identical forms had huge opposition from adoptee rights advocates. This time around, without public announcement and airing, no one knew this travesty, introduced as a unctuous shell, even existed until it passed the House.

Sara Feigenholtz has kept HB 5428 as secret as a sealed birth certificate. She knows that adoptees, their friends, and families loudly oppose her scheme to shove the state's adoptees deeper into the infantilizing Illinois Adoption Registry and to accept, in some cases, legally mutilated state documents (redacted obcs) as the "real thing" She wants to gag us.

In the meantime go to Bastard Grannie Annie's latest: How a bill becomes a law in Illinois

Also go to my Deja Vue All Over Again for comments on the bill. The second part of my blog, Sara Feigenholtz;'s Small Circle of Friends will up shortly.

Just because you are adopted, Sara, does not give you a pass to abuse your class.