We Lose Another One: B J Lifton

At 11:45 tonight B J Lifton died. I don't have the details but I know she had been hospitalized with pneumonia for the past week. I haven't seen any details yet, but I'm sure some will be forthcoming tomorrow.

I first read BJ's books in 1980, right after I got I got my obc. I took Lost & Found out of the Ohio State University Library. It was old and beat up having undergone numerous readings. I was stunned that somebody was actually writing about adoptees from an "us" POV. " Although I didn't agree with everything she said, I was hooked. For the longest time I was convinced that nobody else would ever write about adoption, at least not that way. In a way I was right.

I didn't meet BJ until about 17 years later during the AAC Seattle conference. She had joined Bastard Nation. And boy, were we excited to have such a prominent member. Alfie and I were in the hospitality suite. Alfie was dressed as a cow and I was wearing a big red devil's tail. Shea was with the band. BJ took my hand. I didn't know what to say. All I could think of was, "I'm sitting next to BJ Lifton in this silly costume and she's holding my hand"

Over the years I recovered and we became friends. She was convinced that someday I'd come around and get interested in the psychological problems of adoptees. I never did. 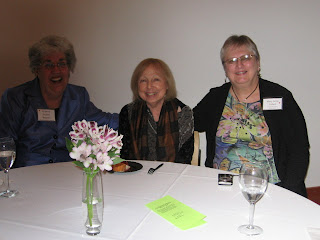 Every time I saw BJ the first thing she'd say was, "And how are the Bastards?"

The last time I heard that familiar question was at the ASAC conference at MIT this summer. She'd had health problems for some time. She seemed better, but looked frail. (Bobbi Beavers, BJ, Maryanne Cohen, MIT)
BJ brought so manly of us into the movement. She was exasperating sometimes, but never dull, and she always cared.

We'll miss you, BJ!
I should have some old pictures. If I do, I'll post them later.