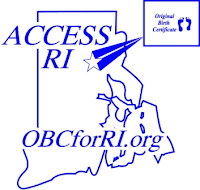 It's been a long 67 years!
Around noon today, Rhode Island Governor Lincoln Chafee, without ceremony, signed S478 Sub AA into law. The bill restores the right of all Rhode Island adoptees, abrogated in 1944, to claim their original birth certificates, without restrictions or conditions, upon request. The law will go into effect July 1, 2012. 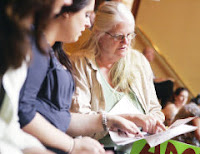 It has been a pleasure to work in an advisory and support capacity with Access Rhode Island: the Little Engine That Could. Through sheer perseverance, clarity of purpose, and a refusal to back down from its core principle of access for all without restriction, Access Rhode Island defeated incredibly strong opposition in the Senate. I don't personally know all the people involved in this victorious campaign, but in alphabetically order, these are some of the who who led the way: Kara Foley, Nancy Horgan, Christine Lachapelle-Miller, and Paul Schibbelhute.
A former activist once told me that states like Rhode Island didn't really count. He wanted the key states. Of course, we all want them, but I argued that all states count. All are important. Small states can bring down key states in the end. Rhode Island just knocked another brick out of the wall!
Kansas: never sealed
Alaska: never sealed
Oregon: unsealed
Alabama: unsealed
New Hampshire: unsealed
Maine: unsealed
Rhode Island: unsealed
Who's Next?
I want to reiterate that a campaign is already in progress to lower the age of access from 25 to the age of majority. It may take a couple years, but this unacceptable barrier will fall.

Posted by Marley Greiner at 1:16 PM No comments: